Home » Should You Try a Ketogenic Diet? 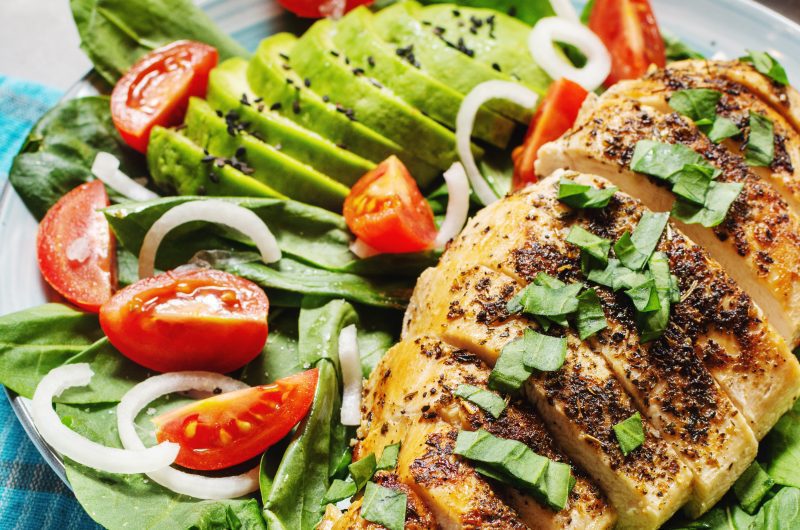 Should You Try a Ketogenic Diet?

As more and more people try to lose weight gained during the pandemic, I’ve been getting a lot of questions about “going keto” – that is, starting a “ketogenic” diet. Whether you’re trying to lose weight or improve your health, you’ve likely heard of ketogenic diets. You’ve probably also heard some amazing stories where people have lost as much as 1-2 pounds a day while following keto.

Back in 2013, I vetted a ketogenic-inspired, Mediterranean-style diet that was then widely popular in Italy. After shedding a whopping 10 pounds in a week, I was singing keto praises. In fact, the ketogenic diet became my go-to solution for shedding stubborn pounds before photoshoots, vacations and special events.

But I must warn you not to take my words at face value and go jumping on the keto bandwagon. As a healthy living coach, avid athlete and blogger, I was infamous for trying new diets to recommend (or not recommend) to others. Despite the almost guaranteed weight loss you’ll achieve, switching to a ketogenic diet can come with some real drawbacks.

So, before you even think about trying it, here’s what you need to know.

Ketogenic diets are low-carbohydrate (or low-carb) diets characterized by a high intake of fat along with moderate protein consumption. As the name implies, ketogenic diets activate a metabolic process called “ketosis.” Ketosis increases the body’s inherent fat burning potential, which supports rapid weight loss, even without counting or restricting calories.

There’s actually not a ton of ‘newness’ to ketogenic diets. Any significant reduction in carbohydrates triggers ketosis. This is the basic premise of Paleo and Atkins style diets – though the relative composition of fat and protein allowed is a major differentiator. For instance, Atkins is traditionally a low-carb, high-fat, high-protein diet while Paleo is a high-fat, moderate-protein diet that also excludes most grains, legumes and dairy foods.

Essentially, both diets involve some level of ketosis resultant from restricted carbohydrate consumption. The lower the carb intake, the more dramatic the weight loss outcome.

Let me break this down a bit further.

Under normal conditions, the body preferentially burns glucose (blood sugar) to meet its energy demands. Glucose primarily comes from the breaking down of carbohydrate-containing foods. If carbs aren’t readily available, the body breaks down and uses the glucose stored as glycogen in muscle and liver cells.

Now, the body can only store so much energy as glycogen (roughly about 2,000 calories worth), so when there’s increased demand, the body taps all its fat stores including the visceral (belly) store situated in the midsection.

This initiates the process of ketosis. If you’re trying to lose weight, it’ll really work to your advantage.

During ketosis, the body transforms into a fat burning machine. Stored fat is mobilized into the bloodstream and transported to the liver where it’s then broken down into free fatty acids that are ultimately used to produce glucose. This process leads to the production of chemicals called ketone bodies (or simply “ketones”) which then serve as an alternative fuel source.

Ketogenic diets facilitate utilization of free fatty acids and ketones for energy in ways that greatly maximize weight loss. But remember, the presence (or absence) of dietary carbs is what dictates the extent of weight loss. Additionally, many other factors can directly (and indirectly) influence weight loss by affecting the degree of ketosis, including age, gender, health status, diet quality and even underlying stress levels.

As I mentioned before, ketogenic diets are generally low in carbs and high in fat with moderate amounts of protein, so you’ll be loading up on foods rich in high-quality fats and protein while keeping your overall carbohydrate intake very low. By “very low” I mean at or around 20-50 grams of net carbs per day.

Net carbs are essentially the total number of carbohydrates absorbed by the body, which you can estimate by subtracting the amount of fiber and sugar alcohols in a food from its total carb count.

To successfully initiate ketosis, you’ll pretty much have to eliminate any foods containing moderate-to-high levels of carbohydrates. The obvious ones include overly processed and refined foodstuffs like candies, pastries, desserts, white bread, cereals, soft drinks, most alcohol and all junk foods.

However, many high-quality carbs like whole grains, legumes, starchy vegetables and most fruits must also go. While these foods are incredibly nutritious, the sheer presence of starch and/or sugars can really drive up their carb counts. For instance, a cup of cooked beans houses an average of 35 grams of carbohydrates while a medium banana contains about 27 grams.

Though technically a quality protein source, most keto diets don’t allow milk consumption due to the presence of lactose. In addition to carbs, some keto dieters also refrain from consuming processed meats, nuts and seeds with salt, and even refined oils (sunflower, canola and soybean oils).

While it might seem as though limiting carbs means limiting everything, ketogenic diets have a lengthy list of acceptable foods. There are some staple foods that you should expect to eat a whole lot of. These include fish and seafood, meats, poultry, eggs and non-starchy vegetables.

Only a select few fruits can be included in a ketogenic diet. These include berries, tomato and savory fruits like avocado and olives. For sweetness, you can use zero-calorie sweeteners like stevia, erythritol and xylitol. You can even enjoy a little unsweetened dark chocolate on occasion.

When it comes to beverages, you can consume unlimited amounts of water, unsweetened teas and coffee. Occasional intake of nut milks, hard liquor (without additives) and dry wines is also acceptable.

That’s pretty much it!

The Benefits of Going Keto

There are a lot of upsides to following a ketogenic diet. The obvious one is weight loss. Besides the increased fat burning potential associated with ketosis, ketones themselves inherently suppress appetite making it easier to eat less. This is especially beneficial, as feeling hungry is one of the main reasons people tend to break away from diets.

Going keto is also an effective way to control blood sugar levels, which helps reduce the body’s reliance on insulin. This not only supports weight management but also helps lower overall diabetes risk.

Heart health is a potential benefit that surprises many. Though regular intake of dietary cholesterol, saturated fat and other dietary devils are at the heart of keto diets, going keto actually supports healthy cholesterol levels by boosting high-density lipoprotein (HDL or “good”) cholesterol and lowering blood triglyceride (fat) levels. This, in turn, reduces the risk of heart disease and potentially life-threatening complications like heart attack and stroke.

In addition to weight loss and all the disease-fighting benefits, ketogenic-style diets have long been used in the treatment of epilepsy (especially in children). This is because elevated levels of ketones in the bloodstream can reduce the occurrence of epileptic seizures.

The Downsides of Going Keto

The primary downside of ketogenic diets is the increased likelihood of weight regain when carbohydrate intake resumes. This will happen as you’ll likely have a slip and fall off the bandwagon at some point in time. In fact, weight regain is quite common within six months to three years following ketosis-driven weight loss.

Following ketogenic diets often leads to extreme fatigue as well. This can be a real problem if you regularly participate in moderate-to-vigorous endurance exercise. Personally, this is where I’ve always fallen off the bandwagon with very low-carb diets in general. For many, fatigue is most pronounced within the first couple of weeks, but it could occur more regularly.

Another side effect that’s minor but rather unpleasant is halitosis (bad breath), which results from high concentrations of ketone bodies. Drinking wheat grass juice, chlorophyll water and peppermint tea are just a few strategies I’ve personally used to counter bad breath during ketosis.

Over time, ketosis can cause kidney problems in people with pre-existing kidney disease. It could also increase the risk of kidney failure in individuals with uncontrolled diabetes and other metabolic disorders due to excess excretion of ketones in the urine.

Ketogenic diets are certainly doable, but you must determine if the eating style suits your lifestyle. Going keto isn’t for everyone, so definitely consider all the factors I’ve discussed before jumping on the bandwagon.

While initiating ketosis is a highly effective strategy for short-term weight loss, weight regain will likely occur unless carbohydrate intake is severely limited or eliminated, indefinitely. Since the long-term effects of going keto aren’t known, its usefulness for long-term weight management is also unknown. As such, if you’re prone to weight gain, proceed with extreme caution and preferably under medical supervision.

Also, know that you don’t have to go full-blown keto to experience associated weight loss and health benefits. Truth is, most people just consume way too many carbs all the time.

You can reap similar benefits (though less rapid weight loss) by simply incorporating sensible portions of high-quality carbs into your daily diet (check out “Our Approach” here at That Salad Lady to learn how). For successful weight loss, shoot for around 50-100 grams of carbs a day and then up your intake to 100-150 grams for long-term weight management. Sometimes it’s about moderation as opposed to elimination. 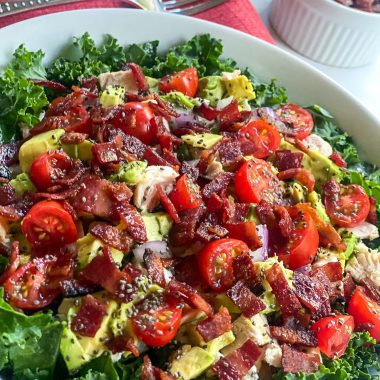 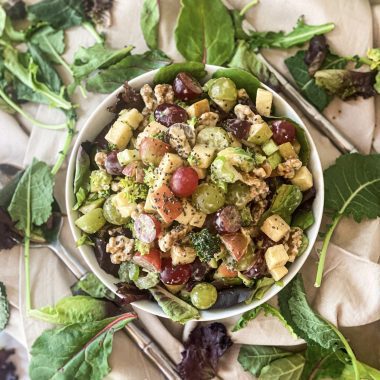