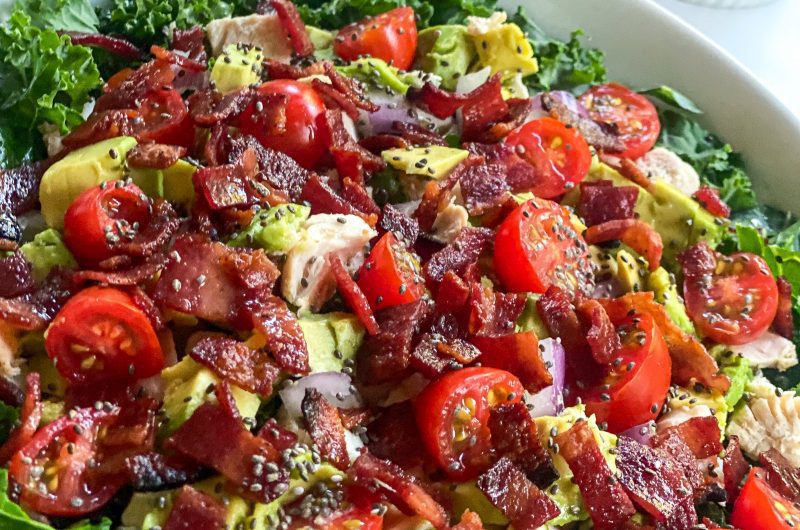 It’s fair to say that the world is obsessed with bacon. Whether eaten alongside eggs and pancakes, layered on top of sandwiches or mixed into pastas, soups and desserts, bacon makes pretty much everything taste better. With its crisp and tender texture, and pleasant savory taste, bacon also lends itself perfectly to a great salad bowl. Here at That Salad Lady we especially love bacon “bits” – hence the reason for our “Homemade Turkey Bacon Bits” recipe.

Growing up, our founder, Nina, was a self-proclaimed bacon addict. During a 12-plus-year stint of pork abstinence, she mastered the art of making crispy, flavorful turkey bacon that even die-hard pork eaters love. Even though That Salad Lady has since reintroduced occasional pork into her diet, she still has more of an affinity for using turkey bacon in recipes. Here we share her clever method of making turkey bacon bits specifically for salads.

While turkey bacon doesn’t necessarily taste like traditional pork bacon, it is equally salty, smoky and meaty in flavor. Turkey bacon is typically made from stripes of light and dark meat pressed to mimic the look of pork bacon. As with pork, turkey bacon goes through a curing process during which it’s soaked with salt, sodium nitrates and sugar.

As processed meat, many would assume bacon to be fairly unhealthy, but it isn’t inherently bad. Bacon is actually a good source of quality protein and other essential nutrients. Still, we’d be remiss if we didn’t highlight some of the drawbacks of bacon, which primarily include the presence of saturated fat, sodium and nitrates. Let’s talk a little bit about each.

Bacon is high in saturated fat, though turkey bacon usually contains less than pork. Generally referred to as “bad” fat, saturated fat is deemed by many to be a major cause of heart disease. Despite widespread belief, little evidence directly links saturated fat with positive or negative effects on heart health so it’s still a big source of controversy. Whether turkey or pork, if you’re simply using bacon as a flavor-enhancer (as we do), saturated fat isn’t a huge cause for concern.

All bacon is rich in sodium (salt). Depending on the brand, turkey bacon might even contain more than pork. For some people, too much salt can raise blood pressure levels. This is one of the reasons we suggest using bacon as a condiment, rather than a meal. Bacon is also best consumed with vegetables and other antioxidant-rich foods. The upside is that its saltiness helps dull the bitterness of certain veggies making them more palatable, especially for skeptics.

As we mentioned above, cured bacon is preserved (processed) with nitrates, which have been linked to cancer. This is yet another major source of controversy, as the nitrates themselves don’t increase cancer risk. When it comes to consuming nitrate-rich foods, problems can arise when the nitrates are converted to nitrites, as these can form potentially toxic compounds during digestion. In other words, nitrates alone can do no harm.

In fact, the nitrates found in some foods may actually help reduce the risk of cancer.

A lot of people don’t know that nitrates are naturally found in vegetables like leafy greens, beets and celery – these are the ones that have beneficial health effects. Unlike processed meats, veggies contain powerful antioxidants that help prevent nitrates and nitrites from becoming problematic. While it’s possible that eating processed meats alongside antioxidant-rich vegetables could lessen risks, there’s a lot more to be learned.

Things to Consider When Choosing Bacon

Here at That Salad Lady, we’re all about making salads fun, creative and delicious. Perfectly cooked bacon can upgrade the texture and flavor profile of even the most bland, tasteless blend. As we’ve discussed, bacon does have some drawbacks, so moderation is the best bet. This is why we mainly use it as a flavor-enhancer. Still, you’d have to be eating a lot of bacon and other processed meats to experience issues linked to saturated fat, sodium and nitrates.

If you’re concerned about saturated fat, opt for turkey or even meatless bacon. While both types contain saturated fat, they generally house less overall fat than traditional pork. Whether pork, turkey or meatless bacon, it’s hard to get around the high sodium content. If you’re concerned about the sodium in your diet, choose from bacon brands marked “reduced sodium” or “lower sodium.” Some of these contain as much as 50% less than regular bacon, which helps.

A notable bonus of choosing meatless bacon over traditional pork and turkey bacon is the utter absence of added nitrates. However, there are many “nitrate-free” bacon brands on the market if this is one of your concerns. Look for brands marked “no nitrates or nitrites added” (or something similar). This essentially means the bacon only contains naturally occurring nitrates from vegetable concentrates (celery juice), which don’t appear to pose health risks.

When used sparingly and paired with vegetables and other antioxidant-rich foods (as we do), bacon isn’t inherently bad. Regardless of what you choose, almost any type of bacon can bring a dish to life. Though our recipe calls for turkey bacon, feel free to experiment with different pork, beef and meatless bacon varieties and see what you like.

Once you’ve brought home the bacon, it’s time to build the bits!

The turkey bacon bits take about 12-15 minutes to prepare and fully cook. That’s it! You’ll need a 12-inch skillet or sauté pan with a lid, a package of sliced turkey bacon and a few tablespoons of light olive oil or another neutral oil with light flavor. To form the bits, you’ll also need a cutting board and a high-quality-chef’s knife.

We suggest starting with a partially frozen package of bacon as the individual slices will hold together easier during cutting. From here, simply place the bacon strips on the cutting board and chop them into small pieces. The recipe specifically calls for slicing the strips in half lengthwise and then cutting them horizontally into small chunks. If you want smaller pieces or bits, just dice the bacon further until the bits are at your preferred size.

Once you’ve formed the bits, grab the skillet or pan, heat two tablespoons of oil on medium-high heat and then add the bacon bits. When the bacon bits start to sizzle, reduce the heat and cover them. Turkey bacon cooks best slowly, covered over relatively low heat. We recommend setting your burner to a low-to-medium setting and keeping it around there.

Watch the bacon bits carefully as they cook and stir them every 2-3 minutes. Unlike traditional pork, turkey bacon doesn’t produce a lot of its own fat so you might have to add a third tablespoon of oil halfway through. This might seem like a lot, but the extra oil will help keep the bits from sticking, overcooking and burning.

Once the bacon bits are fully cooked (about 8-10 minutes) they’ll have a deep-brown color with chewy, but crispy texture. At this point, you’ll transfer the bits to a plate lined with a couple of paper towels until you’re ready for them.

The Versatility of Turkey Bacon Bits

Our recipe makes six servings of turkey bacon bits. These bits not only make a deliciously savory salad topping, but you can also use them to garnish your favorite sandwiches, soups and side dishes. Refrigerate the bacon bits in an airtight container to retain their flavor. They’ll generally last for 4-5 days.

SHOW US YOUR WORK

That Salad Lady wants to see all your great work. If you enjoy your hard-boiled eggs, which we are sure you will, drop a comment below and tag pics on Instagram with @thatsaladlady, #thatsaladlady and #buildyourbowl. If you love it, pin it on Pinterest and share it on Facebook and Twitter using #thatsaladlady.

With their crisp, tender texture, and pleasant savory taste, our turkey bacon bits lend themselves perfectly to a great salad bowl. Make them!

This information is provided as a courtesy and is only an estimate. Please review our full disclaimer to get a clear understanding of the nutrition and health information and resources presented and written on our website. 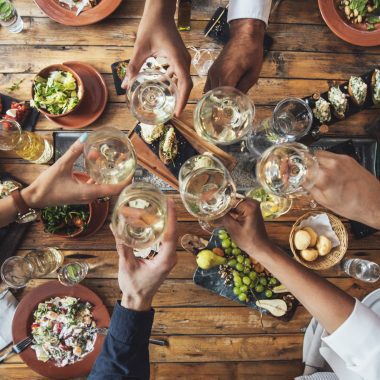 Why I Stopped Counting Calories 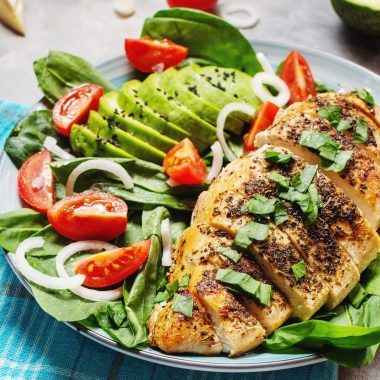 Should You Try a Ketogenic Diet?