Home » What You Actually Need to Know About Sugar 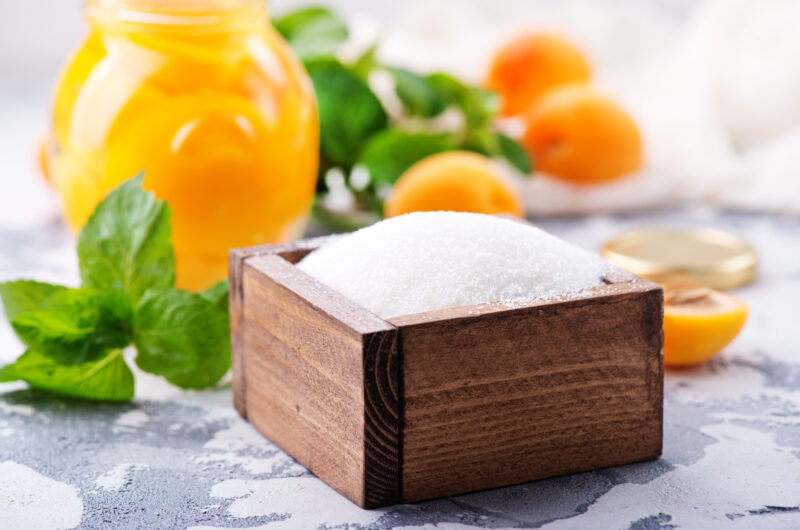 What You Actually Need to Know About Sugar

While things like candy, cookies, cakes, pastries and soft drinks are obvious sources, it’s the not so obvious ones that really take a toll. It’s those hidden sugars housed in unsuspecting foods, many of which are deemed and marketed as “health foods.” It’s in bottled salad dressings and sauces. It is a flavor-enhancer for “low-fat” and “fat-free” foods. It’s all pumped in plant-based milks and yogurts too.

Despite our best efforts, it’s nearly impossible to eliminate sugar from our diets. Even with an all-out attempt to cut back, some of the healthiest whole foods we build our bowls with are naturally high in sugar – and there’s a good chance you’re taking in a lot of it without even knowing it. So how do you cut down on sugar in such a sugar laden world? Is it even possible to strike a balance?

The short answer is yes!

But before I dive too deep into this conversation, let me first clarify exactly what sugar is.

What Exactly Is Sugar?

Believe it or not, sugar is not just the white stuff in the sugar bowl. It’s actually what makes a carb a carb. For real! Sugar is the basic component of all types of carbohydrates. This essentially means that all carbohydrates are in fact sugars – whether beans, bread or lettuce. Chemically known as “saccharides,” these sugars come in many different types. The different types are classified by the different sizes and structures of the sugar molecules they contain.

Controlling your overall sugar intake starts with understanding the different types of sugars and how they behave. So, here I’ll briefly break down the three main types and later explain exactly how each type affects our bodies.

The simplest forms of sugar, monosaccharides contain a single sugar molecule. Due to this relatively simple structure, the body doesn’t have to break them down. As a result, when consumed alone, monosaccharides are easily digested and quickly absorbed into the bloodstream. The monosaccharides themselves include:

In addition to these three sugars, other common monosaccharides include dextrose and sugar alcohols like sorbitol. The latter is widely present in fruits and fruit juices and often added to “diet” foods and “sugar-free” products.

Finally, there are the polysaccharides, which result from the chemical combination of three (or more) sugar molecules. In the nutrition world, we call polysaccharides “complex carbs” due to their relatively large size and “complex” molecular structure. Compared to monosaccharides and disaccharides, they generally take much longer to digest, are not as easily broken down, and are slowly absorbed into the bloodstream. The polysaccharides themselves include:

As you can see here, sugar comes in many forms and goes by lots of different names – and these are just the chemical names, not necessarily the one’s depicted on ingredient labels. I know, this doesn’t make it any easier to monitor your overall sugar intake. But, no worries, I’ve got you.

What’s in a Name Anyway?

While I can go on and on about all the different names and all the ins and outs of sugars, I’d like to keep it simple. Rather than memorizing names, it’s more important to know that whenever we consume carbs, they’re all broken down into individual molecules of glucose during digestion, and then ultimately absorbed into the bloodstream. Remember, glucose is our body’s preferred energy source for fueling vital functions and all types of activity.

Although our bodies need a continuous supply of glucose for energy, problems arise when too much of it enters the bloodstream too fast.

A rapid rise or “spike” in glucose is generally followed by an even more rapid drop or “crash.” This is because glucose spikes themselves trigger the pancreas to release an essential hormone called insulin, which you’ve probably heard a lot about. Insulin’s primary role is to clear excess glucose from the blood fast.

The quick action of insulin often causes blood glucose levels to fall too low. This typically manifests as lethargy and sudden (sometimes even continuous) hunger. The latter is one of the ways in which constant sugar consumption actually promotes weight gain.

Now, when blood glucose levels remain too high for too long, insulin signals the liver and muscle cells to take up the glucose for storage as glycogen. But these cells can only hold so much. Once the liver and muscle cells have met their storage capacity for glycogen, any remaining glucose is converted to triglycerides and stored in adipose tissue, which is commonly known as body fat.

This is yet another way, consuming excess sugar promotes weight gain.

Over time, continuous insulin release can cause the body’s cells to become less sensitive to it (insulin resistance). This is what contributes to the development of prediabetes and, if left unmanaged, type 2 diabetes. Fortunately, adopting a well-balanced diet and a healthier lifestyle will greatly reduce the likelihood of weight gain and health problems.

So, let’s shift gears and talk about some “best practices” for controlling your overall sugar intake.

How to Control Your Sugar Intake

So, as you might have already guessed, controlling your overall sugar intake, ultimately involves limiting your intake of monosaccharides and disaccharides while focusing more on the slow digesting polysaccharides.

While adopting a low-carb diet is a great way to do this, in most cases, you don’t have to go that far. Truth is, many people just consume way too much sugar in too many forms all the time. Oftentimes, it’s about moderation as opposed to elimination – and it doesn’t have to be a difficult process. Below are five super simple tips for managing your overall sugar intake without totally doing away with carbs.

I could easily tell you to avoid candy, cookies, cakes, pastries, soft drinks and other processed foods but it’ll sound much too cliché. Instead, I’ll just encourage you to be mindful of both the “total carbohydrates” and “total sugars” you consume as depicted on any given food label. Depending on your eating style, you might choose to err on the side of about 50-150 grams of total carbs per day (obviously the lower end would apply to low-carb eaters).

Higher quality carbs generally contain large amounts of fiber (at least 2 grams per serving), low amounts of “total sugars” (less than 10% of total calories) AND no or very low quantities of sugar alcohols – even the naturally-occurring sugar alcohols like mannitol, xylitol and sorbitol, which I mentioned earlier. And, speaking of sugars, whether “natural sugars” or “added sugars,” a good rule of thumb is to not exceed 25-37 grams of sugar per day.

This equates to about 6-9 teaspoons of table sugar, HALF a bottle of Naked Juice or a Grande Caramel Macchiato. I’ll just leave it at that.

2. Fill Your Bowl (or Plate) with Non-Starchy Veggies

Whether leafy greens or bell peppers, non-starchy vegetables are naturally very low in sugar, high in fiber and chock-full of disease-fighting antioxidants so you’ll always get more nutritional bang for your buck by filling at least half your bowl (or plate) with them. That’s why they’re at the top of our list of bowl basics. While you have endless options with non-starchy veggies, here are five favorites you should definitely build your bowls with.

3. Treat Any and All Starchy Foods the Same

While starchy foods like legumes, whole grains and starchy vegetables are all slow digesting and high in fiber, they’re all ultimately converted to glucose and can still cause spikes, particularly when consumed in excess. This is why I mainly suggest treating them all the same. As you wouldn’t load up on bread, you don’t want to load up on starchy vegetables like corn, peas and sweet potatoes either. Make sense?

Now, depending on your goals, I generally recommend staying within a range of 3-5 daily portions of starchy foods, collectively. If you haven’t already done so, definitely register to get your FREE copy of That Salad Lady’s “Grocery Shopping Guide” to see how it’s done.

While fruits are undeniably nutritious and contain good amounts of fiber, with the exception of savory varieties like avocado and olives, they’re still monosaccharides and behave as such. Therefore, consuming them in large quantities can cause unnecessary glucose spikes too. This impact is even more pronounced when consuming fruits in liquid form as with fruit juices and fruit-dense smoothies.

Depending on your goals, you might choose to err on the side of about 2-4 fruit servings a day. A single serving equates to a small banana, a half-cup portion of berries or a cup of cubed melon.

Recall my mentioning that monosaccharides are most easily digested and rapidly absorbed into the bloodstream when consumed alone. This is why I generally recommend consuming quality monosaccharides, as well as disaccharides, with other nutrients like fats and proteins. Pairing these sugars with fats and/or proteins substantially reduces the rate at which they’re digested and ultimately absorbed.

This can be as simple as spreading a little nut butter on an apple, enjoying your favorite berries with a side of nuts or even adding a glaze made with honey or maple syrup to your salmon. Just check out some of our bowl recipes here at ThatSaladLady.com and you’ll see how we strategically pair simple sugars with proteins and fats for maximum nutrition. Remember, the goal is to reduce glucose spikes.

I threw a lot of information at you. But hopefully you’ve learned something new. I said it once and I’ll say it again – Sugar is everywhere. However, it is possible to find balance. It’s all about wisely and mindfully building every bowl or plate of food you consume.

Finally, I can’t emphasize enough the importance of regularly engaging in exercise and other forms of physical activity. When coupled with good nutrition, physical activity inherently helps control blood sugar levels by reducing the body’s overall demand for insulin. This is primarily because movement in general has “insulin-like” effects that naturally lower blood glucose by increasing the rate at which it’s used to fuel the working muscles. 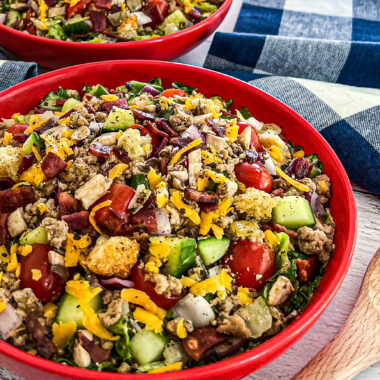 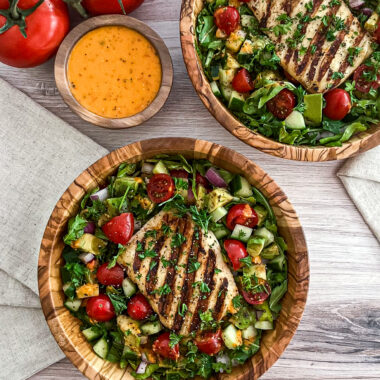